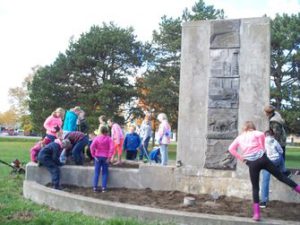 DHS is excited to welcome one of Canada’s most renowned artists, Christian Corbet to Dunnville. He will be working to refurbish the Centennial Park Fountain artwork. He will be bringing Lukas France to work with him. Here is Christian’s biography:

Christian Cardell Corbet is one of Canada’s most renowned artists, art historians and patrons. His portraits and landscapes have provided a special significance for Canadians in understanding an appreciation for our surroundings. He views the landscape with a rhythmic and distinctive character. His works are unpopulated void of figures but on the rare occasion depicts architectural structures. He has taken his place in a distinctive Canadian succession however, he has done so as an individual and without any sense of breaking with his tradition.

Corbet was born into an affluent family in 1966 at the former lakeside beach resort of Pickering Beach on Lake Ontario. This location provided him with the ideal setting to develop his talents for painting. He was stricken with acute asthma at the young age and at 14 and he began his informal education in commercial signage under the tutelage his paternal grandfather, and later at the University of Guelph and McMaster University Anatomy Laboratory. In 1994, Corbet moved to Vancouver, British Columbia where he was befriended and influenced by renowned painters such as Jack Shadbolt and Isabel McLaughlin among others. Following his move to BC the urge to travel took Corbet to the United Kingdom where he worked for a short period in watercolours. While in England, he began to experiment more in abstraction and non-objective work. In 1995, his portrait of HM Queen Elizabeth the Queen Mother, presented at Clarence House launched Corbet’s career to an international level.

Corbet saw England as “…lyrical and rhythmic in subtle colours much like Canada” which to an extent is his artistic inspiration. He had initially painted a series of paintings in watercolour; however, he was discouraged with the results and destroyed most of them. Studying the work of great artists such as Turner, Rossetti and Ruskin in England, prompted Corbet to revisit landscape painting in 1997. He returned to Vancouver to revitalize his connection with the Canadian landscape but never abandoned portraiture completely.

Corbet had been credited as an “…explorer with a curiosity to travel and document how he sees life in line, shape and colour. He loves design.” In addition to exploring the Canadian, North American, British and Channel Islands landscapes, he is also a collector of both modern and historic works by Canadian women artists. He established the Corbet Collection of Canadian Women Artists (CCCWA) in the 1990’s.

Corbet’s experience with abstraction gives his recent works a strong feeling of the flux between time and space and with a sense of movement and calm. These works depict an awareness of the moment, power and immediate presence such as his popular iceberg works. Having lived in four provinces and dividing his time between Newfoundland, Canada and the UK, he has a keen sense and true experience with each destination he has visited.

Not limited to two-dimensional works Corbet has also gained international acclaim for his art medallions and portrait busts for which many depict notable world figures whom are now friends of Corbet’s. Some of his many famous subjects include Margaret Atwood, Dame Jane Goodall, Col. Geo. Stanley, Admiral Sir Charles Kingsmill, HM Queen Elizabeth II and HRH The Prince Philip, Duke of Edinburgh among many other notable personalities worldwide.

Corbet’s medallions are yet another facet of his ability to both paint and sculpt, a rarity for most artists. He has also gained international recognition as a Forensic Artist working as Artist in Residence for the University of Western Ontario where he creates forensic facial reconstructions for special assignments. His most recent reconstruction was for the Department of National Defense aiding in the identification of a WWI soldier. He recently completed a forensic reconstruction of an Egyptian Mummy from the Royal Ontario Museum.

Corbet’s art can be found in many distinguished permanent collections, some of which include the Imperial War Museum; Aberdeen Art Gallery &  Museum; British Museum; Canadian War Museum; Dept. of National Defence – Navy Headquarters; National Museum of Ireland; and the Numismatic Museum in Greece as well as the world famous Rijksmuseum, among over 90 other important public collections worldwide.

Christian Corbet is the Founder and Past President of the Canadian Portrait Academy (CPA), Founding Member, and President of the Canadian Group of Art Medalists (CGAM), Member of the British Art Medal Society (BAMS), and Member of the Federation on International Medalists (FIDEM). He is also a Fellow of the renowned Royal Society of Arts, UK (FRSA). Corbet’s career is cited in numerous international publications to include “Who’s Who in Canada”; “Canadian Who’s Who” among other biographical and fine art related publications.

In 2012 Corbet was awarded the Queen Elizabeth Diamond Jubilee Medal as well as Grant of Armorial Bearings and Badge from the Crown. In the same year he was bestowed the title and appointed the first “Sculptor in Residence for the Royal Canadain Navy”.

In 2013 Corbet was commissioned by The Royal Canadian Regiment to sculpt an official portrait bust of HRH The Prince Philip, Duke of Edinburgh, KG, KT. Corbet became the first North American to have sculpted Prince Philip from life-sittings at Buckingham Palace. In June a private unveiling of the portrait bust was held at Canada House where HRH Prince Edward Duke of Kent bestowed upon Corbet the Honourary Title of “Regimental Sculptor for The Royal Canadian Regiment” a first ever appointment of its kind in The Regiments 130 year history. In 2014 Prince Philip invited Corbet back to Buckingham Palace to present a second edition of the same portrait bust which The Duke placed into the Royal Collection.

Christian Cardell Corbet is widely considered one of Canada’s most sought after portrait artists, benefactor to the fine arts and Canadian fine art historian. It is believed that he is the most represented Canadian portrait artist to have ever hailed form Canada.

She has over 600 followers and it would be great if we could promote the restoration project on that page too.