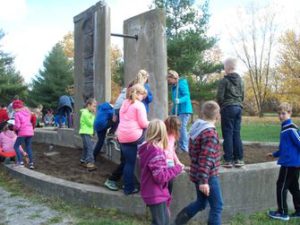 DHS feels honoured and excited that Christian Corbet has agreed to be a part of its biggest project ever, the restoration of Centennial Park Fountain.

Christian Corbet will come to Dunnville for two weeks in mid-May to restore Holbrook’s original work on the fountain to pristine condition.

“It was probably the most monumental of them all,” said Christian of Holbrook’s sculpture work on the Dunnville fountain.

“He was very excited to hear of our project and to be a part of it,” said Debbie Thomas.

Christian hopes to not only restore Holbrook’s work to its original pristine, but also hopes to educate and inform the community on Holbrook’s legacy and on the discipline of sculpture in Canada.

“We want to be able to reach out to everybody in the community,” said Chrisitan. “We believe a lot of people don’t know the history of this memorial from 1967. This year is Canada’s 150th so this marks the 50-year anniversary of the sculpture and fountain itself so it will be a good eye-opener.”

Chrisitan Corbet was the only person she took under her wing.

Bedding plants and Neonicotinoid use