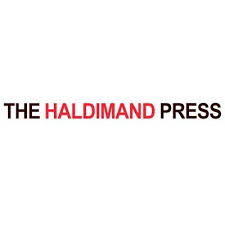 If someone wishes to grow a grape vine, it’s very easy to have this enjoyable, productive fruit growing on one’s trellis, arbor or pergola.  Both for fertilization and to have vines which produce in different months, it’s a good idea to have two varieties.  For example, , Fredonia (pictured here) an earlier table grape, ripens in August whereas Concord, a favourite juice variety ripens later.  In fact, Concords are tastier after a frost.

To root several cuttings, March or early April is an effective time of the year.  This method involves more work and takes longer.  To simply make a couple rooted vines, the summer is an excellent and easy time.  It also produces a much stronger root system.

Five  simple steps are depicted in the photo.

1.  Find a grape vine which is putting out long new growth.

3.  Lay the vine in the trench with the tip and a set of leaves extending beyond the end of the trench as shown.

4.  Remove the leaves from the vine in the trench.

The middle stick in the photo has been put there to show how the end has been cut to hold the vine.

The vine in the explanation photo is attached to the fruited vine in the other photo grown as a privacy wall beside our townhouse deck.

After a couple of months, a rooted vine can be removed from the soil and severed from the main vine to transplant in your desired location. 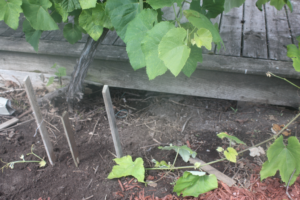